In consideration of the health and safety of our Cadets, Benedictine Military School has constantly been on the forefront of industry health and athletic standards. On that goal, BC maintains an evolving relationship with St. Joseph's/Candler, whose own efforts have been "to evolve to provide services to improve health and safety of students and athletes," which includes providing Benedictine with a full-time Athletic Trainer and Health Office Coordinator since 2002. 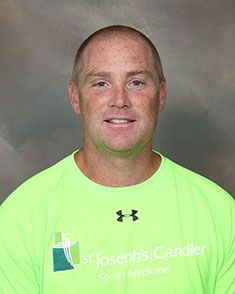 Benedictine has been fortunate to have Brian Tuten as our Health Office Coordinator and Head Athletic Trainer since June 2004. Brian is employed by St. Joseph’s/Candler Hospital, where he has worked since 2002. Prior to his position at St. Joseph’s/Candler, he was employed as the Sports Medicine Coordinator for Appling County Healthcare System, where he served as Athletic Trainer for Appling County High School from 1999-2002. He has also held an internship with the Denver Broncos of the NFL in 1998 and 1999.

Brian is a native of Savannah, Ga., and earned a Bachelor of Science degree in Health and Physical Education with a concentration in Athletic Training from Armstrong Atlantic State University in 1998. He earned a Master’s of Science degree in Sports Medicine from AASU in 2004. Brian has been a nationally board certified Athletic Trainer since June 1998 by the NATABOC and is licensed in the state of Georgia. He is also CPR/AED certified and a member of the NATA, SEATA, and GATA organizations.

Brian and his wife, Diana, have three children: Kyler, Kaden and Briana.