Headmaster
Fr. Frank Ziemkiewicz, O.S.B., is a retired U.S. Army Colonel and Prior of Benedictine Priory in Savannah. His previous experience includes serving as Dean of Students at Saint Vincent College in Latrobe, Pa. and as pastor of St. Mary’s Parish in St. Mary’s, Pa. His service term at St. Mary’s was interrupted as he had to serve as a chaplain in the U.S. Army during a tour of duty in Afghanistan and Iraq.


He received a commission in the Army’s engineer branch in 1971 and through the ROTC was on active duty in Germany from 1972-74. His military service included having a company command for the 3rd Engineer Battalion while in Fort Stewart, Ga. from 1975-78. The Reverend Colonel’s final assignment was with the U.S. Army Corps of Engineers, Savannah District. While in Savannah, he became acquainted with the Benedictine community and pursued a calling to the priesthood.

Leaving active duty in the military, he went to the Saint Vincent Seminary in Latrobe. Father continued his military career following his ordination as a priest, later attaining the rank of Colonel before retiring in February 2007. He has a B.S. degree in mechanical engineering from the University of Pittsburgh and master of divinity degree from Saint Vincent Seminary. 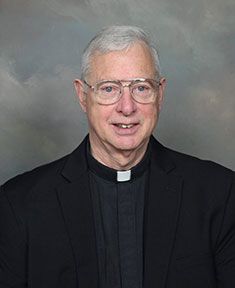 Campus Ministry
Fr. Ronald Gatman was born Jan. 27, 1943, in Laconia, Ky. He graduated from Holmes High School and graduated from the University of Kentucky with a bachelor of arts degree in education and French.

At age 24, he enlisted in the Navy and was sent to California for nine months, followed by Texas for an additional three months of schooling. He served in Scotland for a year, followed by isolated duty for nine months in Turkey. Due to budget restraints, he was released early after serving in the Navy for three years and seven months.

Upon returning to the United States, to become fluent in French, he enrolled at the University of Geneva in Switzerland, and attended for two semesters. He went into the seminary studying theology in Fribourg, Switzerland, and continued his pastoral studies at St. Vincent Archabbey in Latrobe, Pa.

In 1974, he became a novice, accepting his simple vows. In 1977, he professed his solemn vows, and on May 19, 1979, he became an ordained priest. For the next 36 years, he taught at Benedictine Military School, teaching religion, until he retired from teaching in 2007. Since his retirement, he serves more as a priest, being called upon by former Cadets’ families to make presentations, for hospital visits, to perform sacraments of baptisms, weddings, and anointing of the sick. Benedictine Prior / Computer Science Teacher / Mathematics Teacher / Media Center
Fr. David Klecker, who is from Minnesota, earned a bachelor of science degree in 1997 from Purdue University, West Lafayette, Ind. He has done graduate work at the Angelicum in Rome, the Aquinas Institute of Theology, St. Louis, and at Holy Apostles College and Seminary, Cromwell, Conn.

He completed his master of divinity degree at Saint Vincent Seminary in 2016. He was ordained a deacon in the spring of 2011. At the Archabbey, his assignments have included work in the Archabbey Public Relations Office; assistant to the monastic community in computer technology and as a videographer. Theology Teacher
Br. Matthew Hershey, a native of State College, Pa., earned a degree in special education from Franciscan University of Steubenville in 2008. In addition to teaching, he has coached club soccer, and been a high school boys junior-varsity soccer coach and varsity assistant.

He began studies at Saint Vincent Seminary in the fall of 2014. His assignments have included assistant director, Archabbey guests and guest facilities; assistant, college athletics; assistant to the director of vocations, and miller, Saint Vincent Gristmill.

Theology Teacher
Brother Gregory Visca, O.S.B., comes from Saint Vincent Archabbey in Latrobe, Pa., where he finished his second year of simple vows and a second year of theological studies in the seminary. Br. Gregory is pursuing a Master of Divinity and a Master of Arts in Monastic Studies. He earned his bachelor's degree in philosophy from St. John Vianney College Seminary in Miami, Fla.

His discernment of a religious vocation spanned four more years after his time as a missionary until he entered the novitiate at Saint Vincent Archabbey in 2018. He has worked in the office of vocations and as assistant master of ceremonies, sacristan, and assistant giftshop manager as juniorate assignments.

Br. Gregory enjoys reading, learning about monasticism and Christian spirituality, and evangelization. He also is enthusiastic about technology, video games, multimedia, and community life. Over and above all things is his deep love for Christ, which he desires to share with the people of God through authentic witness and service.

Br. Gregory was born in Kent, Ohio, before moving to Tampa, Fla. In eighth grade, he started to seriously discern a religious vocation. After graduating high school, he applied to enter seminary for the Diocese of St. Petersburg, where he spent six years in formation.